Lessons from a Lighthouse 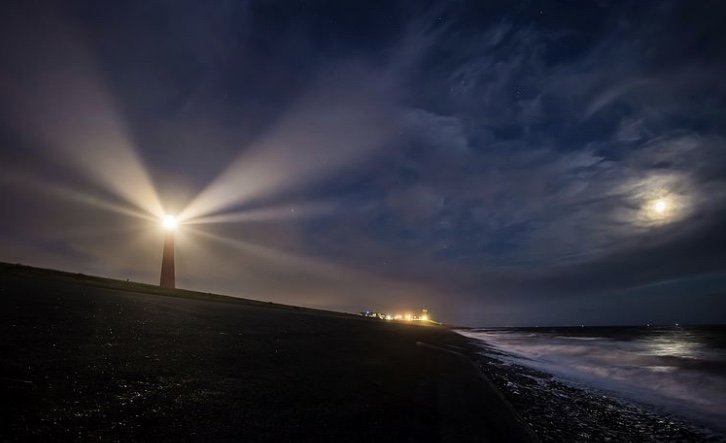 Recently while on vacation, my family and I were given the following directions: “Just look for the lighthouse,” “It’s by the lighthouse,” and “When you see the lighthouse, you’ll know you’re close.” I was excited to not only reach our destination for the evening, but to be so near the lighthouse. Growing up in the midwest, the only lighthouses I had seen were the decorative figurines or those in paintings. The lighthouse soon came into our view. Instead of what I had imagined in my mind to be something majestic, I saw something plain and unimpressive. “That’s it?!” I thought. That’s the lighthouse?! What a disappointment!

My thoughts quickly turned to Matthew 5:16, “In the same way, let your light shine before others, so that they may see your good works and give glory to your Father who is in heaven.” I remembered what C.S. Lewis said, “Don’t shine so others can see you, shine so that through you, others can see Him.” Standing in front of this unimpressive, disappointing (to me!) lighthouse, I was reminded of three important truths:

First, the ability for the light to shine was not based upon the structure which held it. It did not matter that the lighthouse was plain, ragged, and worn-looking. While now it is a historical lighthouse, when it was in use, its light shone brilliantly! I recalled Paul’s words in 1 Corinthians 2, “When I came to you, I did not come with eloquence or human wisdom as I proclaimed to you the testimony about God. For I resolved to know nothing while I was with you except Jesus Christ and Him crucified. I came to you in weakness with great fear and trembling. My message and my preaching were not with wise and persuasive words, but with a demonstration of the Spirit’s power, so that your faith might not rest on human wisdom, but on God’s power.” Dare we call Paul a “plain lighthouse,” if you will? A lighthouse, after all, is simply the structure that contains the light. As I saw that evening, the structure of the lighthouse does not need to be impressive, fancy, or majestic. Its job is to simply shine. Like Paul, we might say we lack eloquence and persuasive words. We might feel physically weak. We could say, as far as lighthouses are concerned, we’re too young, too old, or too middle-aged. Let’s be encouraged that the structure, the lighthouse, doesn’t hinder the light from shining. We, too, can be a simple, plain lighthouse that shines brilliantly to the glory of God!

Second, through the plainness of the lighthouse, I was reminded that its objective was not to draw attention to itself, but to allow others to see by the light it supplies. As Christians, our objective is not, as I wrongly expected of this lighthouse, to be impressive, majestic, or flashy looking – a “look at me!” kind of mentality. Our objective is to just shine, allowing others to see Him.

Imagine with me, if you will, a certain lighthouse. It was everything you would picture a lighthouse to be, and more. It had only one fault: over time, it became tired of shining its light out into the darkness, for the good and safety of others. It decided to turn its light upon itself. It therefore no longer fit the description of a lighthouse, but rather that of a spotlight. How devastating this was to all who depended upon its light to guide them safely around the dangers of the sea. D.L. Moody said, “We are told to let our light shine, and if it does, we won’t need to tell anybody it does. Lighthouses don’t fire cannons to call attention to their shining, they just shine.” Let’s not shine, as a spotlight, back onto ourselves, but rather shine so that the light points to Him!

Third, we are reminded that Jesus instructed His disciples to not hide their light. “You are the light of the world. A city set on a hill cannot be hidden. Nor do people light a lamp and put it under a basket, but on a stand, and it gives light to all in the house. In the same way, let your light shine before others, so that they may see your good works and give glory to your Father who is in heaven (Matthew 5:14-16).” One person elaborated with the following, “You don’t have to trump it (the light) up; you don’t have to light it, crank it up, worry about getting it started, all you have to do is let it go. You can’t stop the light, and you can’t light the light, you can just stick a bushel on it. The light is there. If Christ lives in you, He is the light and you can’t change that…But you can put a bushel basket on top of it so nobody will ever know. It may be the basket of fear, or wanting to be acceptable, not wanting to offend or make waves, or whatever. But whatever it is, it needs to come off. You don’t have to light it and you can’t put it out, you just have to let it shine by the way you live and the things you say.”

Paul illustrates the lessons we are reminded of from the lighthouse. He may have been a “plain” lighthouse, unimpressive outwardly, he certainly did not become a spotlight, turning the attention onto himself, nor did he hide the light, the Light, who lived inside him. In recounting his call to apostleship, he shared with the Galatians, “And I was unknown by face to the churches of Judea which were in Christ. But they were hearing only, ‘He who formerly persecuted us now preaches the faith which he once tried to destroy.’ And they glorified God in me (Galatians 1:22-24).” In other words, as one translation says, “Their response was to recognize and worship God because of me!” Oh, that we would shine in such a way that those around us would recognize and worship God because of us!

“One Sunday on their way home from church, a little girl turned to her mother and said, ‘Mommy, the preacher’s sermon this morning confused me.’ The mother said, ‘Oh? Why is that?’ The little girl replied, ‘Well, he said that God is bigger than we are. Is that true?’ The mother replied, ‘Yes, that’s true honey.’ ‘And he also said that God lives in us? Is that true, Mommy?’ Again the mother replied, ‘Yes.’ ‘Well,’ said the little girl, ‘if God is bigger than us and He lives in us, wouldn’t He show through?’”

This summer, we might reunite with old friends and family or we might visit new places and meet new people. Whether we spend our summer days chasing after toddlers, sitting next to co-workers, or burying our toes in the sand, let’s shine, allowing Him to show through! Let’s allow His light and love to be seen in our good deeds, gracious speech, and Christlike character, that those around us might recognize, worship, and glorify our Father in heaven!